The Single Greatest Obstacle to a Virtual Exchange 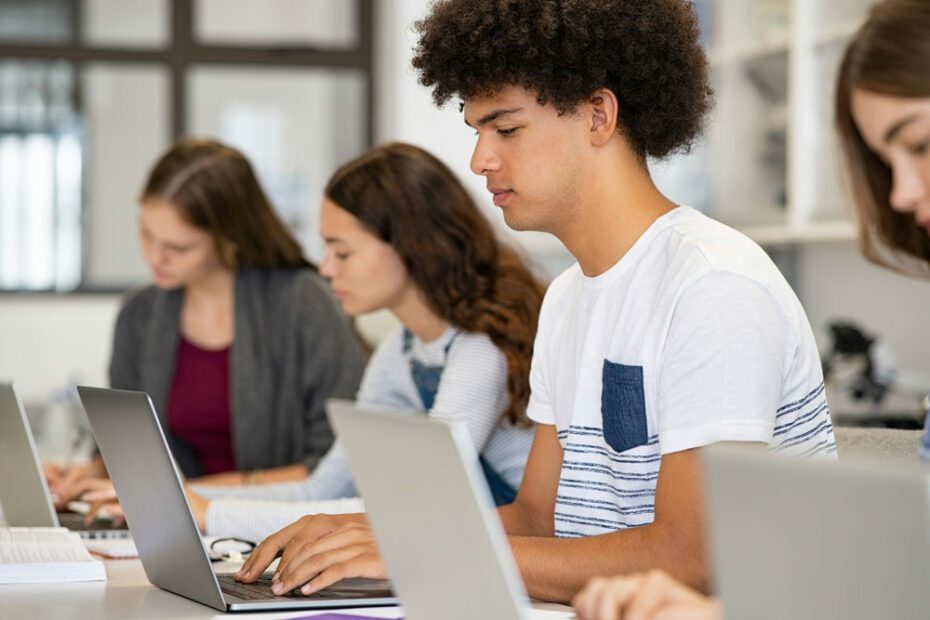 I am always surprised by the challenges students face as their demeanors and habits change from year to year, while my ossified teacher-self relatively stays the same.

We teachers, after around the half-decade mark, can already track the development of our pupils from year to year, evolving as generational and societal trends develop, fluctuate, and change direction.

What are the trends you and your colleagues bemoan in the students of today? Lack of attention span, the necessary social pacifier of devices, a constant need for stimulation, atrophied interest in reading, a decreased practice with written communication, difficulty with eye contact, a paucity of patience, an aversion to uncertainty… The writing is on the wall of the faculty lounge: these kids relate differently from the way we are used to communicating.

Naturally, these variances in comportment translate into what we might assume are inferior communication skills. But are they? On the surface, some of the aforementioned Zoomer traits (or symptoms?) absolutely mitigate effective communication. The feelings of isolation, anxiety, and social discomfort that plague today’s youth probably don’t help much, either.

And yet, in a virtual exchange, we’re asking them to make a connection, and hopefully a meaningful one, with a complete stranger in a completely different part of the world! And to do it on our timeline, no less!

Of course, all of this presents willing participants with numerous complications; but one obstacle above the others shocked me.

When I reflect on this rich morsel of insight, gifted via multiple student reflections, the irony is not lost on me. You guys are the kings and queens of brevity! I shout back against the thick, stubborn walls of my brain. Memes! Emojis! Sentences that don’t start with capitalization and nor end with punctuation!

They’re not even complete sentences!

Admittedly, this challenge surprised me. Even in social media, the younger platforms trend toward pithiness: images over words, videos under a minute, boomerang loops that turn one simple gesture into an eternal loop. Communicative expediency and conciseness characterize the modern age. So why do students think it’s difficult? And how, as educators, can we help them?

The Problem of Brevity

If I were to make a semi-educated guess, I would posit that students have difficulty with the economy of communicating via virtual exchanges because they are unsure of context. They know that some things require explaining, and some things don’t. However, like the end of the famous serenity prayer, they lack “the wisdom to know the difference.”

In a video exchange in which our school participated with multiple other schools across many countries, the students shared their experiences during the COVID-19 lockdown. Notably, the students were asked to keep their videos to a minute, or a minute and a half. A timestamp that, in theory, ought to be right up their temporal alley. But what likely was chosen as a fairly easy and universally applicable prompt where kids would have lots to share, I learned that students actually experienced the very difficulty in question: “I think I said a lot of things I wanted to say in my video, but I didn’t get to say everything. There were a lot of places and experiences I wasn’t able to get in, but I think I did a good job of portraying how I overall felt about the experience,” one of my students explained.

My initial rebuttal was going to remind the young man, Max, that certainly there would be a lot in common in his experience and others’ that could be summarized or referenced rather quickly. But Max beat me to it: “For the other schools, I expect there will be a very similar main theme of virtual school and staying home but I think their experiences will all be different because the governments of different countries all handled Covid in different ways. Because of this, I am very excited to see how my experience differed from those around the globe.”

Although Max wanted to be brief, it’s brevity itself that became his hang-up. It appears that Max understands that the importance of this particular video exchange was to elicit in students a critical eye for the nuances in how different communities experienced the pandemic. However, anticipating that to be the goal of the exchange, Max sounds like he wants to jump ahead and already succinctly tell only the part of the story that will differ from his international partners. He seemingly regrets including information that might be echoed in a common refrain. It’s like he wants to skip ahead to the analysis and conclusion before he’s even heard the other experiences.

Lack of attention span, the necessary social pacifier of devices, a constant need for stimulation, atrophied interest in reading, a decreased practice with written communication, difficulty with eye contact, a paucity of patience, an aversion to uncertainty…

So, how do we help our students with the problem of brevity? Well, the answer comes in a twofold approach: brainstorming redundancies and the filter of second chances.

One calculated mistake I made with this particular video exchange that poor Max found difficult lies in the amount of freedom I gave the students. After I met with them and explained the assignment, I let them shuffle off back to their individual projects without a lot of guidance. What I should have done was brainstorm with them and have them pool their collective knowledge.

In the case of the COVID-19 lockdown, it might have benefitted the students to identify the universality of the experience in a discussion. I know that asking them provocative questions like, “What do you predict everyone’s experiences will have in common?” and “Do you think the hoarding of toilet paper is strictly an American phenomenon?” might have gotten them already thinking globally. It’s probably safe for us to assume that everyone went remote around the same time; that kids overseas probably transitioned to online schooling; and that many families suffered hardships with members losing their jobs, combatting illnesses, and fearing an uncertain future.

Identifying these commonalities in a classroom thinktank might have already put the students a few paces ahead in the conversation. At this point, imagining a communal experience, the participants of a virtual exchange may have had a more concrete foundation upon which to build. It may also have inspired the creativity, curiosity, and confidence of the group.

How many times have you taught the same class back-to-back and found that the second one turns out better than the first? Arguably, the ability to experiment, to rehearse with a test audience, and to measure reactions on a sample group remains one of the sneakiest tools in the teacher’s shed. Truly, every class of students is a guinea pig for next year.

And that’s probably where some of the anxiety in communication comes from for young people today: they don’t have the practice, the repeat experiences, and the downtime to experiment like in the protozoic age before the internet. Because of the permanent nature of communication on the internet, young people know today that making edits can’t be done in secret, statements can’t be retracted, and images can never be erased. However, there’s very little practice, and to appear authentic, people need to sound unrehearsed, natural, and off the cuff. The lightning-fast hot take has now superseded the thought-out analyses of the past.

To achieve the kind of communication that students now see in YouTube video essays, situational skit comedies, and the wit of Tik Tok videos, students need to appear confident, friendly, and knowledgeable while somehow maintaining facile spontaneity. But the only way to do that, sadly for our students, is practice!

My suggestion is to do the unthinkable, and they might hate you for it:

Ask them to film a second video.

That’s right. What if after they film their video message, you ask them to do it again. This time, they’ll likely have their thoughts in order, and for the second take they’ll know the key points they want to make. They’ll be loose, the stakes will seem less daunting, and suddenly they’ll actually be as natural as they want to appear.

As the ways, interests, and behaviors of our students continue to change and differ from ours, we need to adapt and learn how best to help them with their abilities to communicate. Most importantly, we want them to successfully represent themselves in conversations with their international peers, and to do so with a sense of ease that allows them to authentically shine.

In order to get them at their best, and to overcome their fear of taking up too much time, we need to give them some of ours. When they need to get to their ideas quickly, let’s teach them to map out the shortest route. When they want to appear comfortable, let’s teach them how to dispose of their performance anxiety. In brief, let’s show them how easy communication can be if they can just learn to be themselves.