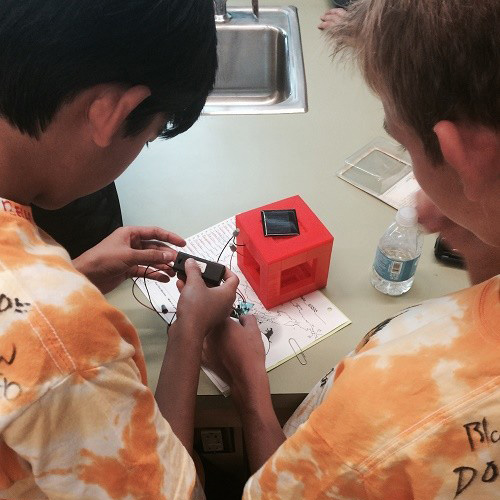 My classroom was alive with activity and a palpable sense of purpose as I maneuvered around the scattered knots of students, 10 in all, to get a closer look at their design journal entries. Group discussions, the random clatter of keyboard taps and mouse clicks, and the mechanical beeping and whirring of the 3D printer created a surprising harmony as my seventh-graders put the finishing touches on their latest creation — a prototype of a portable electric lamp.

“Oh no, stop the print!” a student cried out suddenly. “We need to re-measure the handle to make sure Anielka can hold it comfortably. Her hands are kind of small.”

This was the third week of STEAM, a new semester-long elective course offered at St. Gabriel’s Catholic School, a PreK–8 school of 450 students, nestled in the hill country surrounding Austin, Texas. STEAM class — which integrates art with the traditional science, technology, engineering, and math emphasis — takes an inquiry-based learning approach with a focus on design thinking, engineering, and computer science.

In this case, we were in the middle of a collaborative project with eight elementary-age students from NicaPhoto, a nonprofit dedicated to empowering children who live in one of the poorest barrios in Nicaragua.

In this semester-long Global Inventors/3D printing course, students from St. Gabriel’s and NicaPhoto joined forces to co-create a workable solution to a real-world problem: how to safely provide electric light for the Nicaraguan students, including Anielka, who lived in an area without a reliable power grid.

When I heard my student call out to her classmates, I was reminded that this process of persisting, problem solving, and creating something meaningful is the very essence of constructionism, a decades-old philosophy visible in its latest incarnation — the maker movement.

Creating a Nation of Makers

In 2007, the National Academy of Sciences released a report calling for sweeping improvements in K–12 STEM education. But even earlier, an eclectic assortment of tinkerers and hobbyists was already quietly changing the world. This motley group drew upon a variety of influences, including the DIY counterculture aesthetics of the Whole Earth Catalog and the whimsical mix of artistry and computing exhibited by MIT’s Tech Model Railroad Club. The group also capitalized on the open exchange of ideas during the meetings of the Homebrew Computer Club in the late 1970s. Club members included the eventual founders of Apple and Microsoft.

Then, 10 years ago, Maker Media, Inc., increased both the credibility and visibility of this growing subculture by hosting Maker Faires around the world. At this point, the movement captured the attention of mainstream educational institutions.

The efficacy of the maker phenomenon rests in the fact that it is not really a new idea at all. Rather, it’s the expression of an educational philosophy that goes back many decades to Seymour Papert, the father of the maker movement. Not only did he predict the benefits of one-to-one student computing in the early 1970s, but he also developed the notion of constructionism. In his works, including the seminal Mindstorms, Papert suggests that deep learning occurs through the process of creating an artifact, be it a computer program, a sonnet, or a robot.

When offered the opportunity to create something personally relevant and meaningful, students willingly and enthusiastically embark on the iterative design process, overcome challenges, and collaborate with others as they seek to learn more skills to help with future endeavors. The proof for this is visible not only at Maker Faires but increasingly in school makerspaces around the world. However, implementing a program that harnesses the compelling nature of making in support of a formal curriculum can still be daunting.

In the summer of 2014, I was brought aboard at St. Gabriel’s to develop a program that would both integrate STEM learning across the curriculum and use the new makerspace, which was still under construction. While I was researching various approaches to this, I was about to have the STEAM elective class — Global Inventors/3D printing — field test concepts before the makerspace opened. A chief goal was to provide students with authentic learning experiences that would incorporate the tools, skills, and dispositions necessary to be successful in an increasingly complex and connected world.

Although the school had access to a 3D printer, at that time it was not widely used, and it caught the interest of my class. Through the local Austin Maker Ed community, I learned about the educational services company Level Up Village (LUV) that connects U.S. schools to a global network of partnering organizations to provide real-world, collaborative projects. After speaking with a LUV representative, I selected the Inventors Course because its curriculum provided students with skill-building opportunities in engineering, 3D design, and fabrication. It was also open-ended enough for me to tailor for the STEAM class.

My students were motivated by a desire that went beyond using a 3D printer. They wanted to help their eight Nicaraguan partners, who because they lacked reliable electricity were forced to study, read, and play by potentially dangerous oil-fueled lamps. During the course of a semester, St. Gabriel’s and NicaPhoto students were equal partners in the mission to design a working solution to this problem. Over time, the students from both schools also developed a deeper understanding of the lives and circumstances of their distant partners. 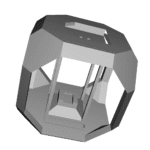 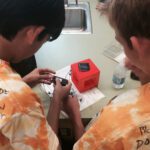 Through regular video exchanges, Skype sessions, and cloud-based file sharing, they worked their way through the iterative design process together, overcame failures, refined ideas, and eventually engineered working solar-powered lamps in a 3D-printed enclosure. Although the basic components of each lamp were identical (a single rechargeable battery, a solar cell, and an LED), the designers’ creativity and the end users’ needs were apparent in each unit. During this semester-long course, my students were delighted to discover that what they were learning in their math, science, social studies, and Spanish classes had real-world, practical applications. 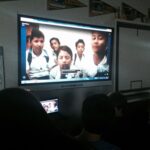 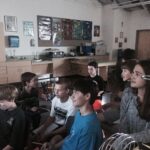 Moving from STEM to STEAM

Meanwhile, my experiences during this period at St. Gabriel’s, including during the STEAM course, were influencing the trajectory of the maker program I was developing. Seeing my seventh-graders initially struggle with “non-Googleable” questions and then over time grow into confident, purpose-driven thinkers confirmed, for me, the efficacy of making in school.

However, I did not want these gains to be confined solely to an elective class. Other local approaches for STEM education tended to limit student access to tools and concepts, including programming, fabrication, and robotics, by offering them only through electives or in after-school clubs. Similarly, younger students typically made infrequent visits to a computer lab with little practical application within their own classrooms, much less their personal lives.

With this in mind, my goal was to combine the analytical nature of STEM topics with the more personal, creative aesthetics inherent in making. By explicitly integrating the arts into learning and adopting a STEAM approach, the program could help our youngest students develop important cognitive competencies.

For instance, when creating a work in any artistic discipline, an innate part of the process involves considering how parts of a system work together to form a whole, working within time or material constraints, and determining the best path for a problem with multiple solutions. In addition, to honor the mission-driven nature of the school, our maker program would incorporate a design-thinking model, rooted in empathy, to support our burgeoning student inventors’ desire to serve those outside the community.

The creation and eventual full implementation of this STEAM by Design program is just one piece of a profound systemic transformation that St. Gabriel’s is undergoing. The school is doing great things this year: integrating social-emotional learning, redesigning the schedule to support teacher collaboration, and hiring additional personnel to assist with technology integration. As of this writing, we have also completed a major expansion of the campus, including the d.lab for Making. The lab is quickly becoming a favorite space for students.

I’m working closely with teachers from grades K–8 to introduce them to the key tenets and best practices of making, and designing curriculum opportunities that promote STEAM experiences, not just in this makerspace, but in every classroom as well.

As educational paradigms keep shifting, the quest to find the precise combination of cognitive and soft skills leading to successful student outcomes will continue as well. While it does, makers around the world, in workshops and in schools, will keep innovating and honing skills to create something meaningful. I’m certain that for my seventh-grade students, this first experience with making was about more than just a grade; they were designing with their new NicaPhoto friends in mind. This wasn’t just project-based learning. It was people-based, and that made all the difference.

Patrick Benfield is the STEAM director for St. Gabriel’s Catholic School (Texas) and the creator of its maker education program, STEAM by Design. When he’s not working with students, he spends his time as a professional musician, tinkering with a vintage Hammond B3 organ, and learning how to program interactive fiction computer games.